The appearance of this church is sober and the thickness of its walls is a reminder of its function as a fortress against invaders. The church was finished in 1738 and it stands in the capital of the island opposite the town hall. 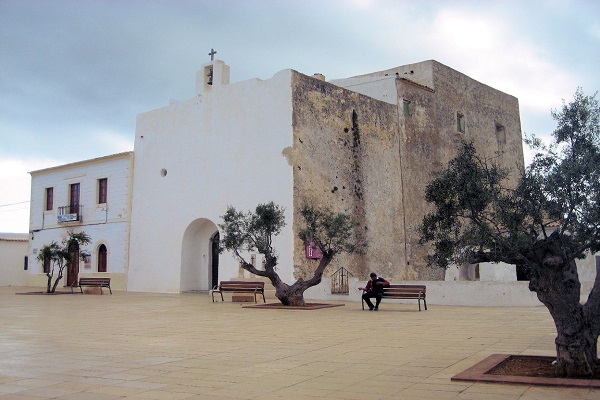 Built in the second half of the 14th century and dedicated to San Valero, this chapel is small and covered by a barrel vault. It stands in the town of San Francesc Xavier and has been municipal property since 1986.

The Cap de Barberia remains show that the island was inhabited from the year 2,000 BC onwards. They consist of 3 different sites that have provided important, finds like pottery, bones and a piece of bronze.

It has a rectangular floor plan with towers at the corners and at the access gate – five in all. It stands at km 10 of the road between La Savina and La Mola and on a high site, showing its inhabitants’ interest in controlling the whole coast.

This windmill dates from 1778 and nowadays not only preserves its original appearance but also its purpose, as its machinery works just as it did centuries ago.

This dates from between 2000 and 1600 BC. It is an important site showing human presence on the island at a very early period. It is well constructed and consists of a burial chamber, an access passage and an exterior structure of concentric forts.