Located in the North East area of Formentera island, near the most beautiful beaches and just a few miles from La Savina pier, Es Pujols is an old fishing village and even now, despite the recent tourist boom, counts just about 600 residents.
Although here is the highest concentration of apartments and Hotels in Formentera, Es Pujols still retains the size of a walking village in all its extension.

Less than 10 minutes’ drive from the ferry port, Es Pujols sits at Formentera’s eastern shoulder, with a large, saltwater lagoon at its rear. It’s the only purpose-built resort on the island, but it still manages to keep things intimate. There’s a sandy beach and, behind it, a paved walkway with shoulder-to-shoulder bars and restaurants. Deeper into the town, the slim streets thrum with souvenir shops and more terraced places to eat and drink.

Considered the beauty of its beaches, really impressive for a town, especially during mid and low season Es Pujols is still an excellent compromise for those who want to enjoy the magic of Formentera without giving up the comfort of services.

The situation changes significantly in July and August, when Formentera gets overcrowded and the accommodations in this area are almost sold out. This is the time when the famous nightlife turns on, making Es Pujols something unique on the island. On warm summer high season nights, the traditional narrow streets with its numerous shops, bars and restaurants, gets filled up with people, sounds and colors till dawn lights (without ever reaching the excesses of Formentera).

The lovers of Formentera 'la dolce vita' will find around here the best-known restaurants and most trendy bars on the island.
Recommended: for those who want to combine a beach holiday with a touch of good old night fun.

The hotel Voramar is situated in the centre of Es Pujols, just 150 metres away from the beach.
All rooms dispose of: bath or shower, satellite tv, telephone, hair dryer, minibar, air conditioning, safe, terrace or balcony.
Read More 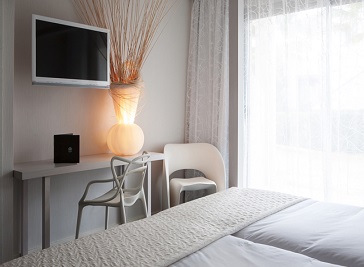 Inspired by the colour white of Formentera, with the perfect mix between modern and smart design. It's fantastic large windows allow one to fully enjoy the natural sunlight of Formentera's sunny bright days.All rooms are composed of a double king size bed or two individuals, terrace with table and chairs, minibar, safe, lcd sat-tv, free wifi, radio-alarm clock and iPhone dock, a/c and telephone.
Read More 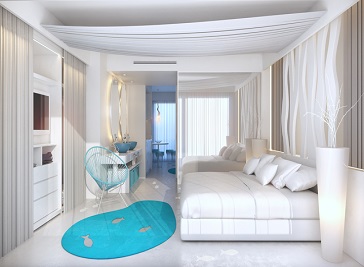