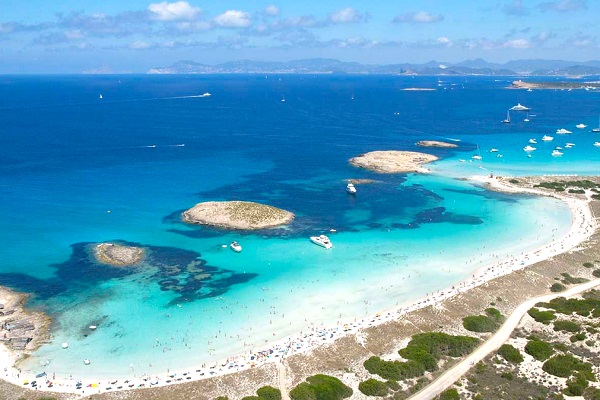 EUROPE’S best beach and the sixth-best in the world is in the Balearic Islands, according to the Travellers’ Choice awards, taking its data from TripAdvisor.

Ses Illetes, on the smallest inhabited Balearic island of Formentera, has been chosen as number one in Europe and six worldwide.

The world’s best beach is named as Grace Bay in Providenciales, in the Turks & Caicos Islands in the Caribbean, just ahead of Brazil’s Baia do Sancho on the island of Fernando de Noronha – directly due east of the vibrant beach city of Fortaleza, but in fact belonging to the State of Pernambuco, whose capital is Recife.

Third in the world is Playa Paraíso in Cayo Largo, Cuba.

Among the top 15 in Europe are six in Spain, with three in the Balearics, one in Andalucía and two in the Canary Islands.

After Ses Illetes in Formentera – based in the heart of the Ses Salines nature reserve – is El Cotillo beach and lagoon in La Oliva, on the Canarian island of Fuerteventura.

Fourth-best in Europe, El Cotillo bay, with its turquoise waters, white sand and volcanic rocks enjoys springlike temperatures year-round and is said to be excellent for diving and surfing.

Bolonia beach, fifth-favourite in Europe, is set in Spain’s kitesurfing hotspot of Tarifa (Cádiz province), but is ideal for bathing when there is no east wind and is surrounded by stunning, unspoilt countryside.

Fuerteventura is back again as number six in Europe with the Cofete beach in Morro del Jable, one of the region’s most unspoilt and accessible via a downhill path with a viewing point on top which is recommended to visitors before making the descent – although they are warned that the area can be rather windy.

Europe’s 10th-favourite beach is once again in the Balearics – Formentera’s Cala Compte, or Compte Cove is perfect in May, June, September and October, but can become very crowded in July and August.

It offers some of the island’s best sunsets, and is highly recommended for snorkelling.

Finally, 14th in Europe is the Playa de Muro in Mallorca.

Travellers recommend Muro beach in high summer, which is when a huge variety of restaurants are open to visitors and create the perfect holiday atmosphere.

But it is not overly packed, say travellers, remaining fairly tranquil even in summer and ideal for relaxing walks, sunbathing or sports.